Tax Deduction at Source, by all standards, is the most trusted “Valet de chambre” for the Revenue. It is a loyal and time-tested lackey for the Exchequer. TDS is a universally used ‘Mr Dependable’ tool

TDS is one buzzword that tends to produce a hissing whisper in your eardrum even if you are not a taxpayer. TDS is also one of the rare acronyms which are more widely known, if not understood, than its full form – Tax Deduction at Source. For most taxpayers, TDS is, of course, tedious for the tax deductors as well as taxpayers but it is fascinating too. But for who? For its own master. Aha! It is, by all standards, the most trusted “Valet de chambre” for the Revenue. It is a loyal and time-tested lackey for the Exchequer. TDS is a universally used ‘Mr Dependable’ tool – not only to plug the ‘sockets’ of revenue leakage but also to garner taxes as and when payments are made.

TDS is also known as withholding tax. Going by history, it was designed to generate a paper trail of payments being made so that the income recipients do not simply vanish in the thin year. In fact, it was quite common during the era of paper-based record-keeping. Thus, it was initially fiscally engineered to subserve the interest of the Revenue by shadowing payments ‘jogging’ from one account to another. And it was indeed a soaraway success story for the Income Tax department. Given its proven efficacy and reliability to track down payments, the GST policymakers also could not resist their temptation to incorporate it in the GST law. Although it has been confined to only notified sets of taxpayers, I can predict without gazing through the crystal ball that it is going to be extended to more taxpayers in the coming years. That is the intrinsic ‘pull factor’ of TDS.

Let me swirl back to the Income Tax which discovered that apart from providing tangible trails of transactions, it was equally efficient in mopping up a gargantuan volume of taxes. Coo. And it was so without incurring even an iota of costs of collection. This elbowed the policymakers in the CBDT to stretch the rubber of TDS endowed with a limitless degree of elasticity. Thus began the journey of expansion of territories for the already-large canvas of TDS. In every Union Budget, a quick run down may reveal that the budget makers have added one or more new sections of TDS or kept shovelling new transactions under its ambit. It is said that the taste of the pudding lies in eating it. So, let’s check it out by peering through the latest revenue collections data released by the Ministry of Finance.

Going gaga over the gross direct taxes collections of over Rs 15.5 lakh crore, the CBDT has underlined that as against the advance tax collections of Rs 6.63 lakh crore, the TDS collections was 6.83 lakh crore till March 15, 2022. If we analyse the calculus of net collections of Rs 13.63 lakh crore after disbursing refunds, the TDS tends to account for more than 50 percent. Wow! Revenue kitty is brimming with revenue without spending a penny on the collection machinery. And it is because it is a statutory obligation imposed on the taxpayers. So says the CBDT Member (Legislation), Pragya Sahay Saksena, who was recently speaking on this issue at TIOL Tax Congress in New Delhi.

Now that it is well established that TDS has increasingly come to be used as an instrument to mop up taxes for the Government, the taxpayers have also begun bellyaching for some sort of incentivisation – if not in terms of lower tax rates or monetary spigots, then at least in terms of ease of deducting tax at source and the other procedures having nexus to it.

What adds to the bowl of woes for the TDS deductors is the difference of opinion on the application of TDS rates on certain transactions which call for complex characterisation tools. In such a situation, the taxman tends to levy interest and penalty and, in many cases, makes disallowance of the expenditure itself. This comes to be seen as an insensitive response in the eyes of TDS Deductors who often believe that they are doing yeoman’s service for the Exchequer.

A canyon exists in the differing perceptions of the taxman and the TDS Deductor who knows that the payment is of the deductee but one has to bear high compliance cost for others’ income. Ashutosh Dikshit, Partner, Deloitte India, believes that a time has come for the CBDT to align its TDS provisions with the GST and capture the data at the GST invoice level itself. Such an alignment or harmonisation between two sister tax laws would enable the Government to snarl the ever-expanding territorial jurisdiction of TDS which should be applied to only certain high-value and complex transactions so that the flow of revenue to the Government kitty is also not impacted.

I do see eye to eye with the Senior Advocate of Apex Court, Ajay Vohra, who says that TDS has done a wonderful job for the country by expanding the tax-base but the tendency to penalise TDS deductors and chase them even for a default on part of the deductee calls for a fresh approach. The Revenue indeed needs to sympathise with the TDS Deductors who sometimes find themselves caught in a tunnel where it is too risky to decide what TDS rate should apply to a particular transaction. He said that the Revenue needs to take a more empirical approach towards certain sunrise sectors like e-Commerce and cryptocurrency where avoidable compliance burden has been put on platform providers even if the transaction is between the seller and the buyer of goods or cryptocurrency. He supports the debatable idea of incentivisation of TDS deductors – perhaps, in terms of lesser compliance burden.

It is pertinent here to recall one of the key recommendations of the Easwar Committee which has called for the recast of the TDS Scheme. What necessitates immediate rationalisation is the growing burden of interest on delayed TDS, paid by the Exchequer. This issue has often been flagged by the CAG which notes that a pretty high percentage of TDS collected is refunded by the Government and delay in refund pinches the purse of the Government in terms of high-interest rates. Ideally, the CBDT should adopt a pragmatically empirical approach to ensure equilibrium in the degree of revenue collections and the corresponding compliance burden on TDS deductors as well as deductees. To do so, a quick glance through the revenue statistics corresponding to each TDS Section may yield some insights for quarantining low-revenue cases. Secondly, high-interest rates may be trimmed in the salutation of compliant taxpayers rather than as a punitive measure for those who make use of funds as their working capital.

I also strongly recommend that it would be more desirable to strengthen the advance tax provisions to take care of a slice of TDS Sections that may be phased out. At present, the architecture of TDS is littered with pyramid and inverted pyramid tax rates coupled with multiple thresholds. A rationalisation exercise would certainly reduce the rates to a maximum of two rates cushioned by two thresholds. The introduction of TDS Ledger is a hoary demand of the industry but I do agree to an extent that its time has not come as yet. Such a ledger facility may be designed into the provisions but once the steps out of the rationalisation exercise are brought into force. Carpe diem. In certain cases, to make it easy for the taxpayers and also to do justice to the canons of law, some sort of ‘tiny’ fees may be collected in place of TDS so that the objective of oversight is not eluded. The need of the hour is to trust your taxpayers rather than subject them to an auto-da-fé. Time to cork the silting biles in the duct. 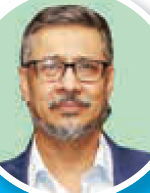 Founder Editor of India’s first PIB recognized online press- www.taxindiaonline.com popularly known as TIOL. He is recognized for his distinguished services of more than 21 years in the field of online journalism besides the 10 years of service in the print media (newspapers). Through his highly popular weekly column ‘The Cob(Web)’ he has been sharing innovative and inventive ideas with the policymakers on a regular basis. He has published a book on black money titled “It’s Raining Black.”