Amrit Sarovar, the water conservation mission envisaged by our beloved PM on the occasion of Azadi Ka Amrit Mahotsav will do wonders when combined with National Highway construction activities. It will boost infrastructure with the enhancement of water conservation

REALISING big dreams requires the support of action and realising big goals require perseverance, vision and working in a mission mode to make them come true. When traditional methods approach solving the issues of public importance, innovative thought processes and convergence of ideas come in handy to support any mission, task or goal. The same has happened in the case of an innovative method devised for the Amrit Sarovar Scheme which has attracted the attention of the entire country.

In India, scorching summers bring the severe problem of water scarcity in all regions, especially in the rural areas where water level drops significantly, due to which people and animals both do not get enough potable water.

Hence, intending to conserve water for the future, our beloved Prime Minister has envisaged and declared an idea of ‘Amrit Sarovar’ on water conservation and rejuvenation of existing ponds in his ‘Mann Ki Baat’. I feel that he has a big dream in mind for which he has tasked us all to take the best possible steps as per our might for which we all need to align and act in sync. Hon’ble PM has declared that a minimum of 75 Amrit Sarovar (ponds) will be deepened or created in each district and about 50 thousand water bodies of good quality will be thus realised in the country.

I wholeheartedly welcome this plan and the scheme coinciding with Azadi Ka Amrit Mahotsav. The subject of rejuvenation of existing ponds and water bodies is also very close to my heart as I have been working in this field for many years and for a long time I am associated with agriculture. So, I am happy not only as a part of the Union Ministry but as a farmer also.

There are several districts in my home state of  Maharashtra, which are always affected by drought and severe water crisis. The problem of drought is so serious and there was no solution in sight as there are limits to controlling nature and also in the form of necessary infrastructure and money. We all were helplessly watching that most of the existing water bodies became shallow, over a period of time, due to siltation and their water storage capacity was also reduced to the minimum. This resulted in defeating the very purpose of the water body as water would have evaporated much before the onset of the next monsoon.

In 2017, during my several site visits for the inspection of  National Highways Authority of India (NHAI) works, I decided to explore the idea of digging up these filled-up tanks or water bodies and using the excavated earth or murram and other material in National Highways (NHs) road constructions.

The NH Construction activity has a huge potential for utilising the excavated earth from these ponds, tanks and other water bodies. After interaction with all the stakeholders, technical suitability for using this excavated material in National Highway (NH) road constructions without adversely affecting the quality of roads was devised.

Accordingly, MoRTH came out with model guidelines for utilising the excavated material from existing ponds and water bodies in NH construction on 31st August 2017, which was circulated to all states. However, there still remains a problem of extra cost which the contractors were likely to incur on transportation as most of the time, these existing ponds were not just adjacent to NH roads but were at a distance of 7 to 10 km.

The then BJP-led Maharashtra State Government responded promptly and issued guidelines on 29th November 2017, for making such excavated material royalty-free if used for construction of NH works. Till April 2020, we rejuvenated 873 water bodies and created an additional water storage capacity of 27,279 TCM (Thousand Cubic Metres) in Maharashtra.

Being based on the first pilot project in the Buldhana district, this idea of water conservation is generally referred to as the ‘Buldhana Pattern’ in the state of Maharashtra. Only in the single district of Buldhana, we could execute the deepening of 132 water bodies and create 25 farm ponds. This resulted in the strengthening of water supply schemes in 81 villages, revival of 22 thousand wells and water availability to 152 villages.

If the concentrated efforts in one district can do this miracle, you can imagine what the Amrit Sarovar Yojana will achieve across the country in the long run. Benefits include the availability of water throughout the year, an increase in groundwater table leading to an increase in the levels of wells, an increase in green cover, better agriculture productivity, strengthening of rural water supply schemes etc.

Looking at this synergy of NH construction and water conservation, NITI Aayog vide its letter Dtd 10.08.2020 highly appreciated the ‘Buldhana Pattern’ water conservation scheme and suggested replicating the same in other states. We were enthusiastic to take up such works in Vidarbha, Marathwada, Western Maharashtra and other regions of the state also. You will be surprised to know that, only in the state of Maharashtra, an earth material upto 607 lakh cubic metres was excavated and utilised in the NH works and this activity created an additional water storage capacity of 60700 TCM in the state.

In the recent past, Dr Panjabrao Deshmukh Krishi Vidyapeeth (PKV) located at Akola and Maharashtra Animal & Fishery Sciences University of Nagpur also did their bit and created and upgraded 34 water bodies without any additional expenditure. Most of these ponds and other water bodies are bigger in size and they were created or developed without spending any penny when the work done is worth crores.

I am happy to share that these two universities in Maharashtra have a farm area of about 3552 Hectares. Before the construction of these Sarovars, their irrigation potential was very less and scanty, which was about 150 Hectares. Now, the irrigated area has been increased to 663 Hectares with 20 reservoirs new and revived, and it will increase to 2500 hectares after the completion of all 34 reservoirs.

Moreover, all these ponds were developed on pieces of land where farming was not possible. Thus, barren land was utilised and by creating ponds in the Nalla itself, they get completely filled four times in the rainy season. These ponds can be auctioned out for fisheries. Last year, PKV did an auction and earned revenue worth 8 lacs. However, the scheme did not become commercially viable for contractors as many states have not issued GRs to make the excavated material royalty-free like Maharashtra. I look forward to having some initiation from the Central government in coordination with the states for the same.

Since numerous NH projects are still ongoing all across the country, I feel that the Amrit Sarovar Yojana and NH construction activity should go hand in hand thereby taking forward the development of infrastructure and augmentation of water conservation activities. There are 71 agriculture universities in India and they can come forward to adopt Amrit Sarovar in their respective areas and spread it across the country for the benefit of needy and scarcity-hit regions.

Finally, last but not the least, I would like to thank and congratulate Hon’ble PM wholeheartedly for this innovative scheme through which we all can dream of living in an atmosphere which is calm, green and beautiful.

We look forward to seeing an ancient land of sages and saints regain its green cover in which this great civilization of nature lovers took roots and flourished. I appeal to all the stakeholders to support this cause by doing their best to realise the dream of a Green, Prosperous, Happy and Healthy India by synchronising water conservation and National Highway construction activity. 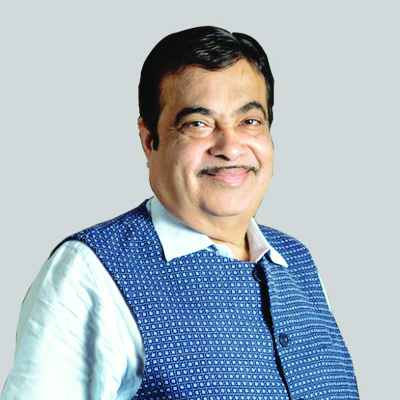 Nitin Jairam Gadkari is Union Minister for Road Transport and Highways and a veteran leader from Maharashtra. He became the youngest BJP President at the age of 52 years. His passion for development, love for the uplift of the poor and ability to deliver despite odds appeal to the grassroots workers. As a politician, he always believes politics is an instrument of socio-economic change. In his book, India Aspires, he spells out his development ideas for the country in great detail.