These are exciting, even euphoric times for India’s youth. Never before have the opportunities been so many, the horizon so close. Yet they need to understand the enormous challenges ahead in terms of politics, society, and their utter lack of preparation.

TODAY, India has the potential of emerging as an economic superpower. At least two generations of its people have reached their prime and then passed on the baton to the next generation. And Now two-thirds of India’s population is within the working-age of 20 to 35 years. Children born between 1981 and 1996, are approximately more than 440 million of the total population so they are undoubtedly the largest millennial cohort on the earth.

These young Indians will be the world’s largest labour force and market for goods and services. In that sense, 2022 will be the beginning of those fruitful years, which would require a lot of foresight on the part of millennials to change the country’s political climate. A political hotbed like India cannot be seen through the lens of narrow-mindedness and short-term gain. Young India would need to chart out realistic vision and goals for the polity and that won’t be easy. And it also proposes a range of factors for our youth that will improve the country for the whole population. This includes aiming for full employment, improvements to the judicial system and legislature to create systems that are seen to be operating with integrity, equity and transparency and cleaning the environment for all and making India a major nation in the world.

As per the 2021 estimate by CIA World Factbook, India’s median age is 28 years. This means that half of its population is under 28. Among the top 10 economies in the world, India has the youngest population followed distantly by Brazil, which has a median age of 32 years.

Therefore, Young Indians will be the world’s largest labour force and market for goods and services. But one needs to be fairly credulous to buy such optimistic arguments. Until and unless we analyze the current context and set the correct agenda for the following year, things are not going to get as rosy as we would like to believe. Words like growth, progress, development have diverse ramifications and everyone, youth all the more, needs to examine these minutely to set the correct course for an incredible India. Let’s try and figure out the agenda for Gen Y or Millennials.

Narendra Modi and Arvind Kejriwal’s brand of politics has drawn many youth into the political arena. Thousands rallied behind these leaders to realize political change. But is the youth participation going to remain limited to electoral politics or are they ready for the next change? Because India’s youth is an asset in the longer run, particularly when compared to China, a country whose one-child policy was viewed as a demographic crisis in the making.

Abinav Singhal recently returned from the US after completing his Masters in Public Policy at the University of Texas- Austin. In his view: “This is not a repeat telecast of Total Revolution or anti-reservation protests of the 90s, when students were misused for electoral gains. The political awareness has spilled out of college campuses to office spaces, glass buildings and green fields. Youth have much higher stakes in politics now.” Singhal has launched an advisory firm for political parties. Millennials have upped their ante in politics. Protests against the Citizenship Amendment Act (Bill) and AFSPA and movement against Farm Laws led to a wedding of sorts between social issues and politics, and young people played the roles of matchmaker.

The same youth that had conditioned themselves into believing that politics is to be avoided, have now realized that political participation is a sine qua non for the nation’s development. RTI, RTE, Jan lokpal etc are not just about politics, it is about the political capital that Gen Y needs to invest to draw suitable returns in the future. These are long term investments. I am reminded of a Chinese proverb: “If you keep doing what you’ve always done, you’ll keep getting what you’ve always got.” Our political history had been deeply mired in the politics of identity and ideology. This has led to a kind of partisanship where consensus is also difficult to arrive at. This needs to change. Gen Y would need to shift its focus to issue based politics, where each issue is examined on benchmarks of development, human, social and economic, and not through the myopic prism of political affiliations.

Millennials have been witness to recent political developments that could be the prelude to the Politics of the future. Modi and Kejriwal’s brand of politics has drawn many youth into the political arena

One of the common threads that bound together the Arab Spring in Egypt and Tunisia was unemployment. One would be extremely cynical to lump India with the Arab world, or Africa or Eastern Europe but sample this: The unemployment rate in urban areas of the country for the people of all ages was 9.4 per cent in January-March 2021. This was the lowest since the nationwide lockdown was imposed in March 2020 but was higher than the pre-pandemic levels of 9.1 per cent, showed the Periodic Labour Force survey by the National Statistical Office (NSO). The unemployment rate in January-March 2020 was at 9.1 per cent in urban areas for people of all ages, the survey showed. Joblessness, or the unemployment rate, is defined as the percentage of unemployed persons in the labour force, which is the sum of people who are working and those who are looking for work. It also stated that the unemployment rate among females in urban areas was 11.8 per cent in JanuaryMarch 2021. Previously It was 13.1 percent in October-December 2020.

India adds around 13 million people every year to the workforce. Even though the Labour Force Participation Rate is quite low at 52.5 percent, the number of job-seekers is staggering.

Check out some other statistics. Indian startups created around 2 lakhs jobs in 2020-21. The Union government informed the parliament on December 15, 2021 that Indian startups recognised by the Department for Promotion of Industry and Internal Trade (DPIIT) have created 1,92,427 jobs in 2021 so far, the highest in four years. Around 72 per cent of the startup founders are less than 35 years of age, making India the youngest startup nation in the world.

Indian youth need to understand that identities are not created through social media especially by Facebook posts or tweets. It takes blood, sweat and toil to build an identity. It requires a lot of effort

Job creation has been Prime Minister Modi’s main agenda. It is the reason why he launched initiatives like Digital India, Make in India, Pradhan Mantri Kaushal Vikas Yojana. When he declared “Startup India, Stand up India” from the ramparts of the Red Fort on Independence Day, he had serious business in mind.

The government is providing tax breaks to startups, it is fostering incubation centres and simplified the approval process for new projects. In the pipeline is a Bankruptcy law and changes in Intellectual Property laws to enable a better environment for startups.

India never suffered from lack of great ideas, what was lacking was strong, collective will for implementation. With the government pushing the reforms, it is an ideal scenario for Gen Y to leverage the situation. The huge domestic market is going to make it a lot easier to experiment with ideas. Gen Y must shed the inhibitions and insecurities which plagued earlier generations, and demonstrate the entrepreneurial spirit. It is the perfect time to fail in India, and learn from the failures to bounce back.

Along with this risk-taking attitude, young entrepreneurs also need a value-based approach to foster creativity, innovation and strong culture in their organizations. Revenue generation and profit-making are definitely important objectives, but should not be the most important ones. If we look at the history of successful organizations across the world, the ones with strong vision and values stand out. Young entrepreneurs need to replicate such successes here as well, to create a long-lasting impact.

Babasaheb Ambedkar’s warning rings no less true today. For long, India has been a crucible for forging concrete social identities, which has done us more harm than good. Our personal and social insecurities have led us towards social alliances. Our social milieu has been so compartmentalized that we always seek the compartments which are built around our social identities, be it gender based, caste based, religion based etc. In the process, we seem to make some personal progress but at the cost of social prosperity.

Similar observations have been made about economic inequality. Recent research by Angus Deaton, Thomas Piketty and Abhijit Banerjee has clearly shown the social as well as economic costs of inequality, especially in the context of India. How does young India perceive inequality?

“There is no clear pattern”, observes Vandana Agarwal, a career counsellor in a Delhi-based firm. “For a sizable portion of urban youth, who have studied in public schools and have remained alienated from rural or semi-urban life, inequality doesn’t exist. But there are many more who endorse the egalitarian view of society and are actively working to root out inequality. My optimistic side wants to believe that the numbers of the latter are increasing day by day.”

Gen Y would do itself a lot of good in proving Vandana right and not just because of the Utopian ‘God-has-madeus- equal’ view. In a very pragmatic sense, our social surroundings are impacting our personal lives in more direct ways. The more turbulent it becomes, the more opportunity cost it would incur in our lives. Of course, we would have to forgo a lot of choices we have been accustomed to. But this should not stop Gen Y from making the right choice for the future.

For our parents’ generation, financial stability and a secure career was their topmost priority. They did all the hard work to create a problem-free environment at home and made us believe that we are special and destined to do big things in life. Somewhere in this process, the role of sincere effort and hard work got diluted and created a sense of entitlement in us. Our generation started believing that we are so awesome, we deserve a degree of respect and recognition irrespective of how much actual work we do. Many of the problems with our generation, as perceived by elders, can be traced back to such distorted perceptions. We tend to be strongly opinionated, intolerant of the perspective of others and inclined towards unethical shortcuts. When there is a huge difference between our sense of identity and socially perceived identity, it leads to frustration, which has much wider ramifications.

Paul Harvey, assistant professor of management at the University of New Hampshire, conducted some research at the workplace to understand this new sense of entitlement among the younger generation. He said: “Managers have reported a lot of problems associated with this – primarily that these employees have unrealistic expectations and a strong resistance toward accepting negative feedback. Basically, entitlement involves having an inflated view of oneself, and managers are finding that younger employees are often very resistant to anything that doesn’t involve praise and rewards.”

Indian youth need to understand that identities are not created through social media especially by Facebook posts or tweets. It takes blood, sweat and toil to build an identity. It requires a lot of effort and any digression from the path of hard work leaves gaps that are difficult to plug later. No one owes us anything, respect and recognition are earned through perseverance and persistence. As we try to bring reality and expectations closer, our life would be much simpler and more satisfying. 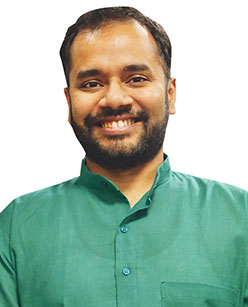 The author is a graduate in Computer Science from BITS, Pilani. He worked for a California-based software firm, Vmware, before joining the Teach For India fellowship programme in 2013. He is presently helping to settle a migrant community, focusing on their education needs. He can be contacted at rkeshaw@gmail.com