To carve out a niche for India in the global arena and enhance participation in international affairs, the G20 presidency would provide significant opportunities for the country in the coming months

THE G20 or Group of Twenty is an intergovernmental platform comprising 19 nations and the European Union (EU) that seeks to address major issues pertaining to the global economy, such as international financial stability, climate change and sustainable development.

Founded in 1999 in response to world economic crises and composed of most of the world’s largest economies, it was designated in 2009 as the ‘premier forum for international economic cooperation’.
Over the years, its agenda has expanded to include public health, agriculture, energy and measures to combat corrupt practices.

The G20 process of decision-making and implementation involves consensus amongst the members, based on prior consultations with the official agencies and entities.

It was in 2008, in the wake of a global financial crisis, that the composition of the G20 was raised to the Summit level, that is, of Prime Ministers. Two tracks were created: one of the Finance Ministers and the Central Bank Governors and the other of Sherpas to tackle issues like climate change.
Another important decision was to divide the Member Countries into five Groups to make it easier to select an annual Chairman.

Group one consists of Australia, Canada, Saudi Arabia and the US; Group two of India, Russia, South Africa and Turkey; Group three of Argentina, Brazil and Mexico; Group four of France, Germany, Italy and the UK and Group five of China, Indonesia, Japan and South Korea. The countries within the Group determine which, from amongst them, will take over as Chairman when it is the Group’s turn.

This would complete one round of chairmanship for all Members starting with the U.S. and ending with South Africa. India’s turn to head the Group has actually come a little late and almost nine years after 2014. Several things are, perhaps, being done with an eye on Elections. Though it was not its turn, the Government of India tried to assume the chairmanship of the G20 in 2018, a pre-election year. But Argentina did not oblige, despite best efforts, since as it was their turn to become Chairman. India has, however, succeeded this time and 2023 is also a pre-election year. The authorities are milking the opportunity to the hilt.

In 1999, when the G20 consisting of the Finance Ministers and Central Bank Governors was set up, India was elected its second Chairman. But they did not make a song and dance about it at that time; the officials concerned went about their tasks in a business-like way. Today, there is another BJP government and the style of working has indeed changed.

Apart from hosting the Summit and setting the Theme, the G20 presidency does not come with any formal powers. India plans on showcasing its philosophies of Vasudhaiva Kutumbakam (one earth, one family, one future) and LiFE (Lifestyle for Environment) through the Theme and the Logo of the event. A statement said that India’s G20 presidency is “striving for just and equitable growth for all in the world, as we navigate through these turbulent times, in a holistic, responsible and inclusive manner”.

Her presidency has arrived at a juncture when many countries are fighting inflation and face recessionary trends, compounded by the Russia-Ukraine war and the standoff between the European Union and Russia. India’s problems with China (a part of the G20) pose a potential issue, notwithstanding Prime Minister Narendra Modi’s brief interaction with President Xi Jinping at the G20 Summit in Bali, Indonesia in November, 2022.

It is being hinted that the Marquee Summit of G20 leaders in New Delhi in September, 2023 will take place months ahead of the 2024 general elections and all efforts may be made to depict India as a towering global leader, with a Prime Minister of exceptional stature at the helm, in order to favourable impact the polls

The G20 group does not have a permanent secretariat and the presidency is supported by the previous, current, and future holders of the post, together called the ‘troika’. Along with India, the 2023 troika includes Indonesia and Brazil.

The Indian Prime Minister expects that, pursuant to India having created a niche for herself in the global arena and increasing participation in international affairs, the G20 presidency affords significant opportunities for the country in the coming months. India will hold over 200 G20-related meetings across the country during its presidency.

India’s presidentship of the G20 (December 1, 2022 – November 30, 2023) has occurred as a matter of course, since this is rotational. The presidency has previously been held by the United Kingdom, USA, Canada, South Korea, France, Mexico, Russia, Australia, Turkey, China, Germany, Argentina, Japan, Saudi Arabia, Italy and Indonesia. These countries did not choose to stage high-voltage drama, as is being done this time around. An aggressive projection of what the Ruling Party hails as a ‘unique chance’ has evoked criticism from the Opposition ranks. It is being hinted that the Marquee Summit of G20 leaders in New Delhi in September, 2023 will take place months ahead of the 2024 general elections and all efforts may be made to depict India as a towering global leader, with a Prime Minister of exceptional stature at the helm, in order to favourable impact the polls.

When all is said and done, what might, in the ultimate analysis, be especially distinctive about India’s presidency is enhanced determination on her part to help resolve the Ukraine issue. This, in turn, would entail intensive interactions with, among others, the Permanent Members of the UN Security Council, including China.

The G20 is not comparable to the UN Security Council whose five Permanent Members constitute the world’s most exclusive and influential club. It is also nowhere close to realising the expectation – expressed by the then Prime Minister, Dr Manmohan Singh in 2008 – of a ‘New Bretton Woods II’.
As of now, there appears some likelihood of President Vladimir Putin attending the G20 Summit in New Delhi in September, 2023. He had skipped the last Summit held in Bali.

India’s presidency has arrived at a juncture when many countries are fighting inflation and face recessionary trends, compounded by the Russia-Ukraine war and the standoff between the European Union and Russia

In Udaipur, Rajasthan, his representative, Svetlana Lukash, said that Russia sees India as the voice of the Global South in the G20 which ‘can heal and unite, rather than promote differences and divides’.
Moscow has welcomed New Delhi’s decision to hold back support to the price cap on Russian crude imposed by the G7 countries and their allies, the imports of which, by India, are understood to have been of the order of 16.35 million tonnes in the first eight months of 2022.

Deputy Prime Minister, Alexander Novak, has offered Russian cooperation to India on leasing and building large-capacity ships in order to not depend on the ban on insurance services and tanker chartering in the EU and the United Kingdom.

A modus vivendi that merits being explored is to induce Russia (possibly, via China) to declare a Ceasefire in Ukraine. In taking such an initiative, the role which can, conceivably, be played by Saudi Arabia (a G20 member cordially disposed towards India) could be crucial.

Immediately preceding the visit of President Xi Jinping to Saudi Arabia in December, 2022, an Article in the party-run Global Times stated: ‘China and the Arab nations are reliable partners who treat each other equally … China respects the development path chosen independently by peoples of other countries … and will not impose its own values …’.

The Crown Prince (and Prime Minister), Mohammed bin Salman Al Saud, received the Chinese President at a lavish welcome, signalling Saudi interest in deepening ties with Beijing. The two leaders signed strategic deals, including a comprehensive partnership agreement, and one with tech giant, Huawei. At the airport itself, Xi Jinping spoke of a ‘new era’ in Arab relations, He was in Riyadh at the invitation of King Salman and attended a Saudi-China Summit where the Crown Prince was present. Xi also participated in a Summit with leaders of the Gulf Cooperation Council (GCC) countries at which the rulers of Qatar, Bahrain and Jordan, the Crown Prince of Kuwait and top representatives of Egypt, Tunisia, Iraq, Morocco, Algeria, Sudan, Lebanon, Djibouti, Somalia and Mauritania were among the invitees.

There appears some likelihood of President Vladimir Putin attending the G20 Summit in New Delhi in September, 2023. He had skipped the last Summit held in Bali

At the start of the GCC Summit, the Crown Prince heralded a ‘historic new phase of relations with China; principles of ‘sovereignty and non-interference’ were stressed, while affirming the urgency of a solution to the conflict in Ukraine. No less importantly, support for Beijing’s ‘One China’ policy (in relation to Taiwan) was indicated by Riyadh whose relations with the United States have been strained over a range of issues, including human rights. Also, Saudi Arabia and the Gulf allies have resisted American pressure to break with OPEC+ producer, Russia, over the action in Ukraine and to limit dealings with China.

This was the Chinese President’s second major overseas visit following the start of his third term (and after a tour to Bali and Bangkok in November, 2022 for the G20 and APEC meetings), underlining the strategic importance of West Asia to China.

At the end of it all, it seems clear that for India to leave a distinct impression on the G20 in 2022-23, a great deal would depend on the innovative capabilities and consensus-building experience of the hand-picked, compact, politically loyal and carefully-identified team of Diplomats and Civil Servants, mostly retired, who command the incumbent regime’s trust and confidence, beyond measure. 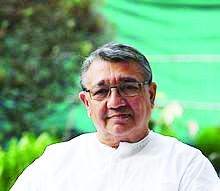 Arun Bhatnagar was formerly in the IAS and retired as Secretary, GOI. He attended St. Stephen’s College, Delhi in the early sixties. After retiring as Secretary (Personnel & Training) in the Union Government in 2004, he worked with the National Advisory Council (NAC) and, later, as Chairman, Prasar Bharati, New Delhi. He has had postings in the President of India’s Secretariat and in the Indian High Commission,
London. Bhatnagar’s earlier Book, ‘India: Shedding the Past, Embracing the Future, 1906-2017’, was well received as a historical narrative.